You are invited to the launch of  birdsong Evolution, our newest musical ensemble at the The Little Carib Theatre, White Street, Woodbrook on Saturday 19 February  at 6pm and Sunday 20 February at 5pm. Tickets TT$ 200. For more information and tickets; Dennis: 620-5285, Shaka: 620-0910 or email dennis@birdsongtt.org.

Farmer Nappy’s phenomenal 2019 hit, Hookin’ Meh, achieved anthemic status at this year’s Panorama competition played by multiple bands, including three of the ten finalists in the large band category, and providing a Renegades’ win at the creative hands of Duvonne Stewart.

The magic of the song also lingered to inspire birdsong’s recently-completed inaugural Pan for the People Workshop as a challenging test piece for adult pan newbies.

So much so that graduating tenor player, Rhonda Jones, re-prised Hookin’ Meh’s opening line in declaring that the class had “hooked” everyone into an undying relationship with the instrument. 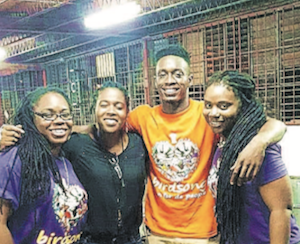 Were it not for eight-year-old Zidan Adams, the average age of the Derrianne Dyett / Terrence Sealey beginners’ class would have surpassed band vice-cap- tain Dr Alisha Wallace’s estimate of 45. Measured against energy levels during the rugged month (30 contact hours) of sessions, the statistic was not readily evident.

Group “elder” Wayne Wallace, 73, on the guitar pans belied his seniority and tenor player Anand Lawkaran (better known as a stage and film actor) a lack of prior knowledge of the musical ranges covered by the several instruments.

“The moment that I realised that I knew nothing about pan was the first day in class when Derrianne (Dyett) and Mr (Terrence) Sealey were (assigning instruments) and I was anxiously waiting to see a real guitar and a real cello,” Lawkaran confessed to chuckles at the graduation ceremony. “A big man like me over 50 years old.” Retired Coast Guard Lt. Louis

Carrington, who now describes himself as “a newly-minted panman” summed up what appeared to have been the popular experience: “When I saw the advertisement of the workshop an excitement consumed me and I immediately sought to ensure that I would be a part of this event.”

“Strike that off the bucket list,” my own features editor responded when I told him that I would be performing at the graduation ceremony as another “newly-minted panman.” Having covered numerous pan events over many years, including the annual Panorama, it could only have been a matter of time for this writer.

Speaking at the ceremony, band director, Dennis Phillip, said the way he saw it, the close to 30 participants in the programme had “broken the mould of what has now become the dominant (negative) narrative of our pan community.”

He dared the new players “to go in another direction” and prove that the national instrument has a positive future—the subject of which he expressed strong views during a sobering address on the state of the steel- band movement. 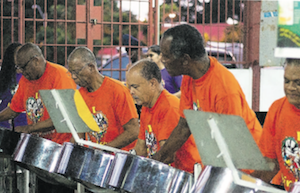 There was little doubt, though, that following the month-long programme a cadre of pan sup- porters, some of them highly knowledgeable in the ways of the instrument as a source of creative expression, would emerge as a part of the band’s growing base of potential stage- side and big event talent.

Dyett, an accomplished musician in her own right, who led most of the sessions, was praised for her effective, engaging style as an instructor. Sealey,

who was described by Phillip as a long-standing birdsong faithful, was recognised by Lawkaran for his ability to break the music down into discrete, manageable “chewable bits.”

Pan-playing and music appreciation were not the only subjects on offer though. Terrence Sheppard provided an introduction to the skill of pan-tuning and Mark Hosten demonstrated old and new ways of panstick wrapping.

Young Joshua Peters clearly knew his stuff as an assistant facilitator, while Kurlston Garcia (who appeared to have been as- signed to this writer) provided able support. Birdsong captain, Carlene Seales was also a constant presence with support from Carlene Blackford, Aldwyn Brooks, Michael Castillo and Arnim Joseph.

At the graduation ceremony, Peters performed Voice’s Far from Finished, and in a sense, summarised the workshop experience.

A WhatsApp group established to maintain regular communication among all concerned remains quite active as a reminder that the journey launched during the month of September was only the beginning of something in excess of the value of the instruction received.

There are plans by the band to host similar programmes in the future, together with more advanced classes, and one-day workshops to enhance pan playing skills and maintain the love of an instrument that brought undoubted joy to a group of mature enthusiasts-turned-players.

Look out for most of September’s graduates when birdsong hosts its annual Christmas programme at Auzonville Park in Tunapuna, in December.